In July, 2014 Glasgow played host to the Commonwealth Games (G2014), the largest event ever hosted by Scotland.   Large-scale international sporting events, like the Commonwealth Games, can be conceptualised as mega-events which, although they are of short duration, often have long-term consequences for the city or country that hosts them.

The governance structure for G2014 security incorporated a wide range of partner agencies including Police Scotland, the G2014 Organising Committee, Glasgow City Council, and private security organisations. Their roles and activities are co-ordinated through overarching governance arrangements led by the Scottish Government.

The 2014 Glasgow Commonwealth Games was used as a valuable case study to explore the culture of security from a criminological perspective. The key aims of the project were to evaluate the approach taken to the governance of security and analysis of risk in the planning for G2014.

Two key outputs of the project were aimed at practitioners and professionals, as well as academic audiences. They detail both the experiences of security planning and provision for the Glasgow 2014 Commonwealth Games, and reflect more widely upon the challenges and opportunities of sporting mega events elsewhere.

“The Governance of Security and the Analysis of Risk for Sporting Mega Events: creating a ‘living legacy’ for Europe from an analysis of security planning for the Glasgow Commonwealth Games (G2014)”, was part funded by the Prevention of and Fight against Crime Programme of the European Union European Commission – Directorate-General Home Affairs

We are using G2014 as a case study to explore the culture of security from a criminological perspective. The key aims of the project are to evaluate the approach taken to the governance of security and analysis of risk in the planning for G2014.

There are two key inter-related areas of research investigation:

e governance of security and, in particular, the dynamics of multi-level/cross-sectoral government relationships and public-private partnerships required for the delivery of policing, security and surveillance. Attention here will focus on developing principles of good governance in the security arrangements for policing sporting mega-events.

The assessment and management of risk; focusing on how risk is understood by different bodies involved in the security arrangements for G2014, the evidence-base which informs the processes of risk analysis and assessment, and how resources are mobilized and deployed to respond to perceived risks.

The study is researching the security planning processes and arrangements leading up to G2014, and we are utilising a variety of research methods to do so:

Key themes of the research include the evolving responsibilities of extant local security providers, the utility of transnational policing, the transfer of security frameworks and technology (particularly following closely behind the 2012 London Olympics) for use during and after G2014, the role of globally mobile security experts, and the subjective experiences and interpretations of the risk assessment procedures which form the basic architecture of the security processes ultimately developed.

In addition, we are running a series of thematic workshops (supported by the Scottish Institute for Policing Research IMPAKT fund) to facilitate knowledge exchange between academics and key G2014 stakeholders.

In February 2013, the G2014 research team hosted a research and knowledge exchange meeting with a visiting group of seven senior Brazilian police officers from the State Military Police in Rio de Janeiro, Brazil. The officers were visiting Scotland as part of a fact-finding mission in order to inform their preparations for the hosting of football matches as part of FIFA World Cup in 2014, and the Olympic Games in 2016. The purpose of their visit was to ascertain more about Scottish experiences of community policing and the policing of large-scale sporting mega event, like the G2014 Commonwealth Games. The meeting with the G2014 research team focused on the challenges of security planning and policing of large-scale sporting events in diverse communities, followed by a discussion of the emerging findings from the G2014 research project. 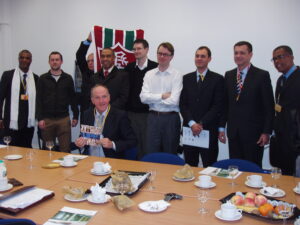 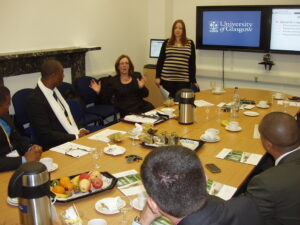 Visualising research on the security of mega-events

There is an increasing amount of international research literature on security planning for large-scale sporting mega-events, and in particular the use of specialised security and policing strategies to address specific crime and safety concerns. Determining which strategies have been effective, and under what circumstances, can be particularly challenging.

Drawing on the work by Dr Cynthia Lum and her colleagues at the Center for Evidence-Based Crime Policy at George Mason University, who developed an evidence-based policing matrix, the idea behind the security of mega-events research grid is to develop principles about the nature of security strategies, and their effectiveness as assessed by the research literature. The grid adopts a broad classification system for each study based on its focus (individuals, groups, communities. jurisdictions); the type of agency involvement (single or multi-agency), and the type of approach taken (physical securitisation, environmental changes, risk analysis). The grid is a work in progress and new materials are added as they emerge.

Scope of Research ( Sort by )

Impact of Research ( Sort by )