Creativity, Inbetweenness and the Fight for Democracy: the 2019 Hong Kong Protests 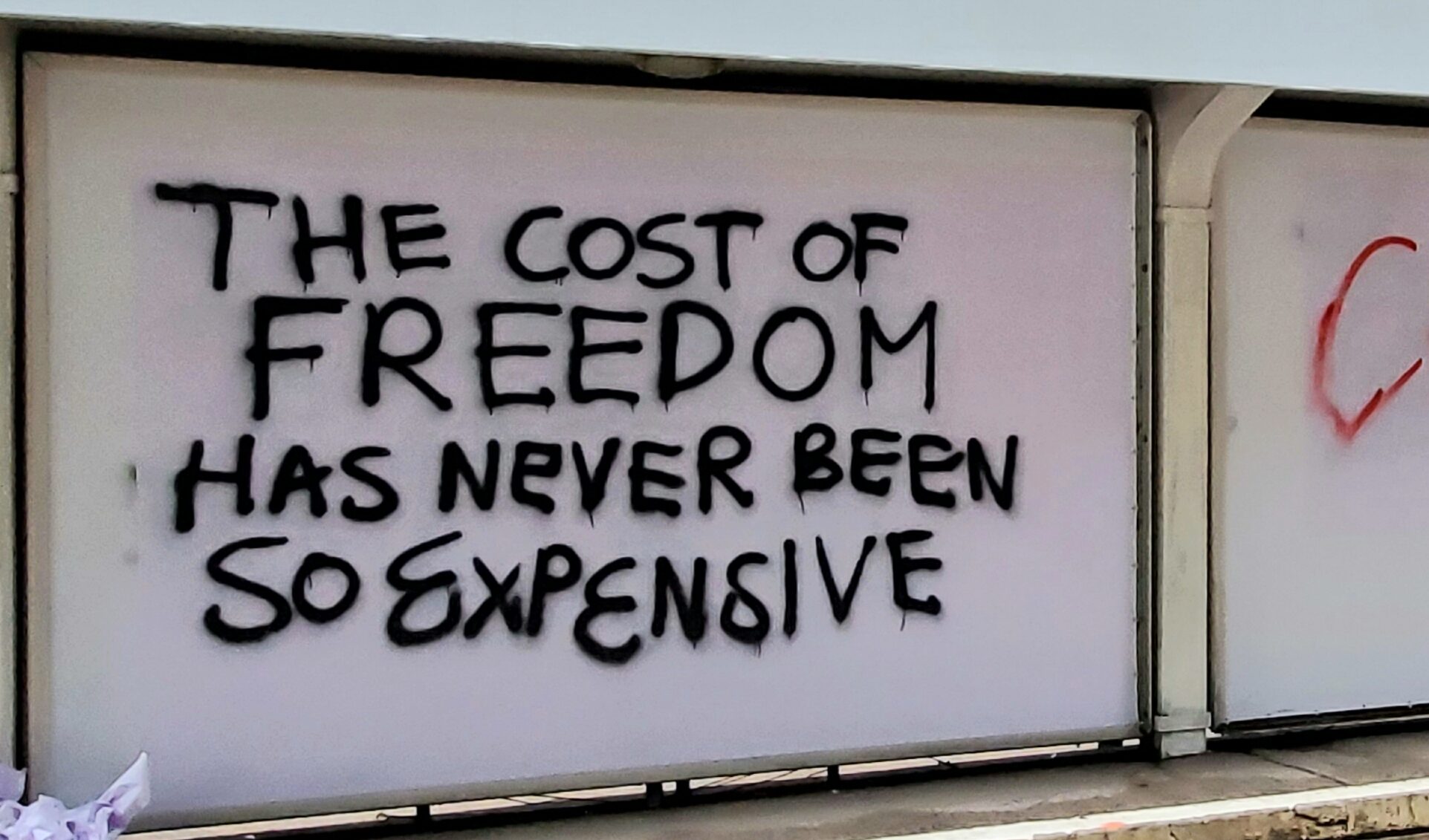 By Dr Emiline Smith, Lecturer in Art Crime and Criminology, University of Glasgow

At the start of October 2019, I traveled to Hong Kong to teach at the University of Hong Kong and the Chinese University of Hong Kong under the Erasmus+ International Credit Mobility scheme. The Scottish Centre for Crime and Justice Research and HKU’s Department of Sociology have a formal partnership, and colleagues have collaborated on a recent project comparing youth leisure activities in Hong Kong and Scotland. Hong Kong had been the focus of my PhD research, so this was a great opportunity to reconnect with colleagues and friends.

Since June 2019, peaceful demonstrations around the city have escalated into violent clashes between police and protestors, including on university campuses. Because of this, many universities including CUHK and HKU have prematurely ended their semester.  Although leaderless (the Financial Times has baptised protests such as those in Hong Kong, Lebanon and Chile ‘leaderless rebellion’) and sometimes polarised, the protests are by no means disorganised or without purpose. What initially started as demonstrations against the proposed 2019 Hong Kong extradition bill, which would undermine the Special Administrative Region’s autonomy and civil liberties, quickly developed into an appeal for increased freedom and democracy after the government’s refusal to withdraw the bill and police’s hard crackdowns on mass peaceful protests. The five key demands that protestors are fighting for are: full withdrawal of the extradition bill; independent investigation into alleged police brutality and misconduct; retraction of the classification of protestors as ‘rioters’; amnesty for arrested protestors; and dual universal suffrage, meaning for both the Legislative Council and the Chief Executive, calling for Chief Executive Carrie Lam’s resignation. Of these five demands, only the first one has been honoured: the proposed extradition bill was formally withdrawn at the end of October. Furthermore, during recent District Council elections, pro-democracy supporters achieved a landslide victory.

At the time of my visit during the weekend of 1 October, while China was celebrating 70 years of Communist Party rule, Hong Kong experienced one of its most violent weekends. In reaction to this escalation of violence, Chief Executive Carrie Lam invoked what would later be established to be an ‘unconstitutional’ colonial-era emergency law banning face masks at public gatherings. This only increased public unrest, and hundreds of thousands of people flooded the streets to protest this further infringement of civil liberties, resulting in widespread damage to public and private property and a complete shut-down of the city’s public transportation system While tensions rose, recognition and mass media attention also increased, and the Hong Kong protests gained global support.

Like many others, I took to the streets around Hong Kong’s Central district to support the demands of the protestors and join in the chanting of ‘Glory to Hong Kong’, the official anthem of the pro-democracy moment symbolising a new Hong Kong identity. While observing the organised chaos, some participants initiated a chat with me, asking what I thought of the protests and if this could ever happen in ‘my country’. They eloquently explained their reasons for protesting, voicing their passionate plea for a Hong Kong belonging to Hongkongers. The protestors I spoke to felt ignored by their government,

but hopeful that they could elicit change, sacrificing their personal safety for the hope of a Hong Kong that listens to, supports and protects its citizens. Some voiced that they hoped to prove that Hong Kong is distinctly different from China, with its own unique value and place in the world.

This experience was very different from the violent, terror-filled image of protests portrayed by some media abroad: here were articulate, passionate youth trying to capture the spirit of Hong Kong and revive a sense of belonging in a global city characterised by ‘inbetweenness’ (see e.g. Mathews, G., Ma, E.K.-W. & Lui, T.L. 2008. Hong Kong, China: Learning to Belong to a Nation. New York: Routledge). Hong Kong is compelled to this liminal state by its geography, colonial history and complicated political situation. During my PhD research, I found that this ‘inbetweenness’ is Hong Kong’s quality: it has incited creativity, entrepreneurship, and innovation, making this global city thrive. However, defining the parameters of self-determination has proven to be difficult for Hong Kong, as it has continued to wrestle with this complex identity, particularly in the face of Beijing’s control.

In their efforts, protestors capitalised on new expressive methods made possible by the

digital age, using social media in an organised, educated way to inspire change. An abundance of creative outputs inspired by the protests remains visible all across Hong Kong: so-called Lennon Walls, murals, posters, video installations and poetry all aimed at connecting protestors with (potential) supporters. I continue to be amazed and inspired by the wide range of Asian and Western pop-culture references that these tangible and intangible forms of creative expression make use of (see photos). These are complemented by the many memes, slogans, songs, cartoons and other artwork circulating global social media for the past six months. Collectively, they have become an effective tool for gathering global support and channelling motivation for the pro-democracy movement.

Hong Kong finds itself once more at a critical turning point. The damage done to trust and reputation will take far longer to repair than the damage done to public and private property. The coming period will have to revolve around reconciliation and rehabilitation, around setting realistic goals to work towards a Hong Kong 2.0 that supports its creative, passionate, resilient citizens. While the road to an open, transparent, responsive government in Hong Kong will be long, its future clearly belongs to its youth. Around the globe, grassroots activism calls people to the streets in highly organised, persistent movements to incite change. The fight for good governance and human rights should be universal, and any collective action pursuing these goals deserves global support. Glory be to thee, Hong Kong.

Emiline’s research primarily focuses on Asia; she has done fieldwork in Hong Kong, China, Indonesia, Myanmar and Singapore. She explores how and why participants take part in illicit transnational trades, and how urban settings, especially so-called ‘global cities’, facilitate such trade.

All photos provided by Emiline Smith