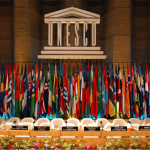 Researchers from the Trafficking Culture team have participated in a UNESCO round table event in Paris on the illicit trafficking of cultural property. Dr Donna Yates, Dr Neil Brodie and Dr Christos Tsirogiannis joined the discussion about what can be done to restrict the movement of stolen cultural items now and in the immediate future.

After the round table Dr Yates spoke to Janie Cangelosi from United Nations Radio about the global nature of the antiquities trafficking problem, the impact of fakes, the benefits of public ownership of antiquities, the anonymity provided by the internet to both buyers and sellers, and ways to raise awareness of looting.

“Public ownership of antiquities and keeping cultural objects in a public trust prevents destruction in a very direct way,” she said. “If I own an antiquity – legally or illegally – as the owner I can smash it and destroy it. There’s absolutely nothing that stops me from destroying the past … except perhaps my own conscience.”

Dr Yates highlighted the duplication of effort in current attempts to create antiquities databases. “A whole bunch of groups are reinventing the wheel over and over again because of a lack of communication between these groups about their goals,” she said.

She highlighted the need for more public discussion about the limitations of the data held by academics and governments. Referring to the UNESCO event, she said “A representative here today said ‘we need lists – we need the countries who’ve lost cultural property to present us with lists so that we can make sure it’s not stolen’. The issue with that of course is that with archaeological objects that come fresh out of the ground, there is no documentation for them. The country of origin can only say: ‘Because there is no record of this object, we know it’s stolen”.

“So in a way I would really like a stronger push to educate sellers and dealers about exactly what is involved in the looting and trafficking of antiquities – why certain information doesn’t exist and why they should care about that information not existing.”

Read more about the round table here.

Simon Mackenzie has conducted two empirical research projects into looted antiquities to date.  The first was a study of the regulatory structure which governs the international market, coupled with a focus on dealers and their role in creating and sustaining demand for illicit artefacts (2001-2004). Output from this study can be found in several journal articles as well as in the book Going,...