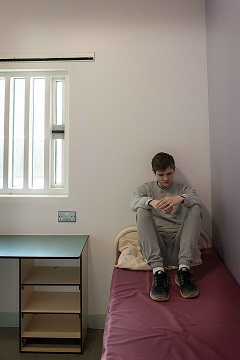 An evidence review on mental health and wellbeing of young people in custody has identified that prisoners should not be isolated or denied access to family or support, and that time outside of their cells should be maximised.

The review, which was co-written by Dr Sarah Armstrong, Director of the Scottish Centre for Crime and Justice Research based at the University of Glasgow and research assistant John McGhee, reveals important factors that can affect young prisoners.

Dr Armstrong said: “The evidence of research and prior reviews makes clear that everyone in prison is vulnerable and that institutions can further exacerbate this through practices such as being locked in cells for extended periods of time, repeated strip searches and experiencing indifferent treatment by staff.

“One of the most important factors is isolation which has a profoundly damaging effect on a person’s ability to cope in prison and is particularly intense for young people. International and European human rights frameworks make clear that isolation of young people should not be used at all and that young people should be diverted from custody wherever possible. “

She added: “Keeping someone alive through suicide prevention measures is not the same as keeping someone well. Time out of cells should be maximised with support for both staff and prisoners to develop relationships of trust in prison.”

The report comes after the Cabinet Secretary for Justice, Humza Yousaf MSP called for a review of mental health services for young people in custody following recent deaths at Polmont Young Offenders Institution.The SCCJR report is part of this review which can be found in its entirety on HM Inspectorate of Prisons for Scotland website.

In their evidence review Dr Armstrong and Mr McGhee highlighted the importance of access to support and personal belongings even for those being disciplined in prison.

They also find that prison staff themselves should be offered support in learning more about mental health issues and empowering and giving space and time for them to form more trusting relationships with prisoners.

Dr Armstrong said: “There is evidence to back the idea that frontline staff and officers are suffering from stress through increased workloads, conflicting demands on their time and the sometimes distressing nature of their day-to-day job. Acknowledging this and supporting staff appropriately would be a positive step forward.”

In conducting their review SCCJR researchers also found that there timing of publishing data on prison suicide means the suicide rate had been underestimated in published research.

“We found the quality of research data on suicide numbers in prison varied greatly with one report basing their analysis on the Scottish Prison Service’s published figures that showed there were 22 suicides between 2011 and 2014 when in fact, according to SPS’s own internal analysis, it was actually 31.

“Categorisation of self-inflicted deaths along with lengthy delays in Fatal Accident Inquiries can fuel misleading analyses about prison suicide rates. Scotland’s suicide rate for 2015-18 is 125 per 100,000 which is substantially higher than that observed in England and Wales and is around ten times the rate for the general Scottish population.”

Dr Armstrong added: “Suicide is the leading cause of death of young people in prison in Scotland and so it is essential that the data captured on this is both robust and independently verified to ensure accuracy of further research. “

The Mental Health and Wellbeing of Young People in Custody: Evidence Review is available to download from SCCJR website.