Donna Yates talks to the media about major museum thefts

Dr Donna Yates was interviewed for Radio 4’s Today programme and STV news after 14 members of organised crime gangs were convicted of stealing artefacts from museums worth nearly £60m.

She told John Humphrys it was clear there was a large market in China for illicit antiquities – specifically, rhinoceros horn and small but very valuable Chinese antiquities – and that those collecting such items did not expect any repercussions.

“What’s exciting about this case is that it actually is being treated like organised crime,” she said. “This particular gang have been convicted of organised criminal offences here in the UK for a couple of museum thefts – rather major ones – and an auction house theft, but these are the same people who’ve been involved in a string of similar thefts throughout the world.”

She added: “These people are organised, they’re focused, and the people convicted seem to be the top rung of organisation. These are very motivated criminals”.

You can listen to the full interview via the BBC iPlayer, from around the 54-minute mark. 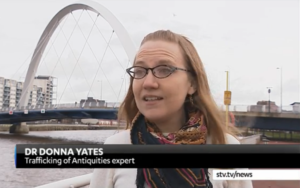 Donna also appeared on STV’s 6pm news bulletin, which highlighted the fact that the gang had also visited Kelvingrove Museum and the Burrell Collection in Glasgow – whose collections also include small, very valuable Chinese antiquities.

She said: “We’re not quite sure why they didn’t rob these museums – it could have been security, they could have been interrupted in some way – but we are quite lucky that we didn’t lose our collections like Cambridge and Durham did.”

She added: “You couldn’t sell any of it in the UK. It’s all documented – one easy check of various registers would show it was stolen. However, moving it to China, where they’re not particularly going to check, the value inflates.”

You can watch the news show via the STV Player, from around the 6-minute mark.