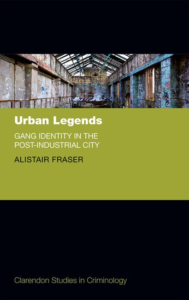 Dr Alistair Fraser‘s book Urban Legends: Gang Identity in the Post-Industrial City was among six shortlisted for a major award this spring.

BBC Radio 4’s Thinking Allowed, in association with the British Sociological Association, presents The Ethnography Award annually to a study that has made a significant contribution to ethnography: the in-depth analysis of the everyday life of a culture or sub-culture.

Urban Legends, published by Oxford University Press, tells a story of young people, gang identity, and social change in Glasgow, challenging the perceptions of gangs as a novel, universal, or pathological phenomenon. 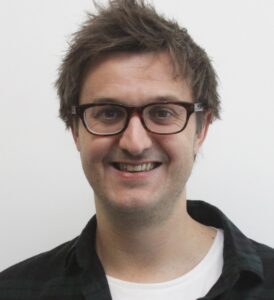 Building on four years of varied ethnographic fieldwork in Langview, a deindustrialised working-class community, the book spotlights the everyday experiences and understandings of gangs for young people growing up in the area, reasoning that – for some – gang identification represents a root of identity and a route to masculinity, in an economic environment that has little space for them.

Dr Fraser’s research into gangs in Glasgow was recently the subject of articles in the Sunday Herald, The Scotsman and the Evening Times, and he also appeared on BBC Radio Scotland’s Kaye Adams show and STV’s Scotland Tonight to discuss his findings.

He will be discussing Urban Legends on Thinking Allowed at 4pm on Wednesday May 18.

From left, Beth Weaver, BSC Prize Convenor James Treadwell, and Alistair Fraser Two Scottish researchers have won the British Society of Criminology’s Criminology Book Prize. The SCCJR’s Dr Alistair Fraser, of the University of Glasgow, and SCCJR associate Dr Beth Weaver, of the University of Strathclyde, were recognised for their titles on two wide-ranging topics: youth gangs and...