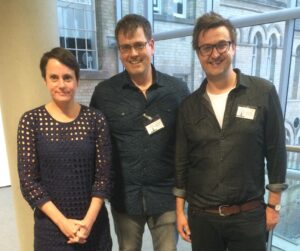 Urban Legends: Gang Identity in the Post-Industrial City by Dr Fraser tells a story of young people, gang identity, and social change in Glasgow, challenging the perceptions of gangs as a novel, universal, or pathological phenomenon. It has been widely acclaimed, and earlier this year was nominated for the prestigious Ethnography Award.

Dr Weaver’s book, Offending and Desistance: The Importance of Social Relations, looks at the role of a co-offending peer group in shaping and influencing offending and desistance, by examining the social relations and life stories of six Scottish men in their forties.

The SCCJR extends warm congratulations to both of this year’s very worthy winners.

Dr Alistair Fraser‘s book Urban Legends: Gang Identity in the Post-Industrial City was among six shortlisted for a major award this spring. BBC Radio 4’s Thinking Allowed, in association with the British Sociological Association, presents The Ethnography Award annually to a study that has made a significant contribution to ethnography: the in-depth analysis of the everyday life...