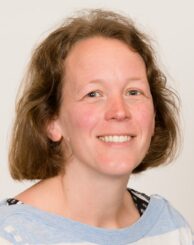 Marguerite joined SCCJR in October 2013 as an ESRC Future Leader Research Fellow and became a Senior Lecturer in June 2021. Her research focuses on the meaning of criminal justice sentences in the context of wider lives, the construction of narratives and the impact of this and criminal justice processes on journeys of desistance.
Marguerite’s post-doctoral project, Lives Sentenced, examined the experiences of men and women who experienced persistent punishment, including multiple short-term prison sentences. Through two life history interviews two years apart, changes in the meaning of punishment were examined. This is currently being followed up by a Community Justice Scotland-funded project, Escaping a Life Sentenced, which examines through a further round of interviews how these people manage and/or fail to leave offending and criminal justice punishment behind.
She is also involved in another project funded by Community Justice Scotland, along with two colleagues, Cyrus Tata and Beth Weaver at Strathclyde University. The Meaning of Sentences is a pilot project which looks at the meanings given to the sentence imposed by the different actors in the courtroom. What meaning does the judge want to communicate, what meaning does the person sentenced perceive and what role does the defence lawyer play in these processes of meaning making? This will be examined through courtroom observations and interviews.
She is passionate about contributing to the public debate about sentencing and criminal justice. To do so, she has developed a graphic novel based on the Lives Sentenced research and set up a website, my-sentence.com, as a place where people can contribute pieces on the meaning of their sentence.

SCCJR welcomes the opportunity to comment in response to this Scottish Government consultation. Our submission focuses on the following key points: 1. We advocate further consideration and discussion of the purpose of the parole system in Scotland. Its future development could formally encompass two purposes: (a) risk assessment and public safety, and (b) enabling desistance and...

The pains of desistance

Hook for change or shaky peg? Imprisonment, narratives and desistance

Adaptation, the meaning of imprisonment and outcomes after release – the impact of the prison regime

Schinkel, M. (2015) ‘Adaptation, the meaning of imprisonment and outcomes after release – the impact of the prison regime’, Prison Service Journal, vol.219, pp.24-29.

The total number of people on remand in Scottish prisons has risen during the Covid-19 pandemic to 27% of the prison population prompting calls for action to be taken immediately. A collective of individuals, including members of The Scottish Centre for Crime and Justice Research and Howard League Scotland are leading on a week of social media...

A graphic novel which aims to bring life to a Scottish woman’s story of trauma, substance abuse and prison has now been turned into a series of educational resources for Modern Studies students. ‘A Life in Pieces’ is the work of Dr Marguerite Schinkel, a lecturer in Sociology based at the Scottish Centre for Crime and Justice Research,...

The Scottish Government has awarded funding to a group of University of Glasgow researchers to look into the current and longer-term impact of social distancing and other behavioural measures on vulnerable groups. The research team, led by SCCJR’s Prof Sarah Armstrong with co-principal investigator Dr Lucy Pickering, will focus on four key...

SCCJR has been commissioned to work on a major new report on repeat victimisation of violence by the Scottish Government. The extensive 16-month research project will be led by Dr Susan Batchelor and assisted by Dr Caitlin Gormley as the main researcher, along with Dr Marguerite Schinkel who will conduct a secondary analysis of her Lives Sentenced...

Colleagues from the Scottish Centre for Crime and Justice Research (SCCJR) have responded to the Scottish Parliament’s Justice Committee which is holding a consultation on the Presumption Against Short Sentences (PASS). The Scottish Government had stated that it would extend the presumption against short sentences to 12 months which will be...

A NEW graphic novel aims to bring life to a Scottish woman’s story of trauma, substance abuse and prison. ‘A Life in Pieces’ is the work of Dr Marguerite Schinkel, a lecturer in Sociology based at the Scottish Centre for Crime and Justice Research, University of Glasgow and illustrator Morag Kewell, and follows the story of ‘Alison’ as...

Unlike long-term prisoners, those with short, repeated sentences rarely view such prison terms as transformative or effective at rehabilitation or deterrence, says a recent study among prisoners themselves into the meaning of serving short-term prison sentences repeatedly and over a long period of time. In a three-year study, SCCJR’s Dr...

New web project to explore the meaning of sentences

Two SCCJR researchers are seeking contributions to an exciting new website, My Sentence. Research fellow Dr Marguerite Schinkel has teamed up with PhD student Alejandro Rubio Arnal on the project, which brings together their related research interests. Marguerite’s research focuses on people’s lived experiences of punishment, while Alejandro is interested in how public opinion...

Members of SCCJR have contributed chapters to the new edition of the Handbook on Prisons, edited by former SCCJR PhD student Jamie Bennett, Ben Crewe and Yvonne Jewkes. Richard Sparks has co-written a chapter on ‘The Politics of Imprisonment’ with University of Edinburgh PhD students Jessica Bird and Louise Brangan, while Fergus McNeill and Marguerite Schinkel of the University of...