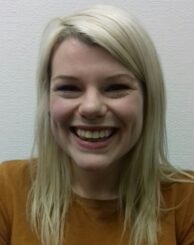 Louise Brangan is a Lecturer in Criminology in the Scottish Centre for Crime and Justice Research (SCCJR) in the Faculty of Social Sciences, University of Stirling. She completed her PhD in Criminology at the University of Edinburgh in 2017. In 2015 she was a visiting Fulbright scholar at the Center for the Study of Law and Society at UC Berkeley. Between 2014-2017 she was a researcher and the Policy and Public Affairs Manager at the Howard League Scotland, and prior to moving to Scotland Louise worked with the Irish Penal Reform Trust.

Louise’s research interests focus on the sociology of punishment, particularly comparative and historical study of imprisonment and penal politics. Her PhD research was a comparative and historical examination of penality in Ireland and Scotland from 1970 until the end of the 1990s. Louise is currently working on two projects. The first is a critical social history of mass decarceration of women in the Republic of Ireland. She is also working on a collaborative project to explore the applicability of Southern Criminology for historical criminology and punishment histories in the North Atlantic.

She is currently co-editor of book reviews at Criminology and Criminal Justice, co-organiser (with Cara Jardine) of the ECR punishment network, PEEP, and is a member of the Scottish Prisoner Advocacy and Research Collective.

The Politics of Imprisonment

Dr Louise Brangan, University of Stirling, has been awarded an ESRC New Investigator Grant for her new project ‘Mass Decarceration: A critical social history’. The three-year study will look at the demise of Mother and Baby Homes and Magdalene Laundries in the Republic of Ireland between 1970-1998. In 1950s Ireland, Magdalene Laundries...

Members of SCCJR have contributed chapters to the new edition of the Handbook on Prisons, edited by former SCCJR PhD student Jamie Bennett, Ben Crewe and Yvonne Jewkes. Richard Sparks has co-written a chapter on ‘The Politics of Imprisonment’ with University of Edinburgh PhD students Jessica Bird and Louise Brangan, while Fergus McNeill and Marguerite Schinkel of the University of...