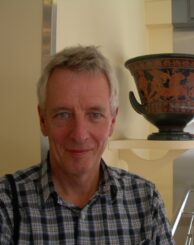 Neil Brodie is a former Senior Research Fellow at the Scottish Centre for Crime and Justice Research, investigating the international traffic in cultural objects.

Neil is an archaeologist by training, and has held positions at the British School at Athens, the McDonald Institute for Archaeological Research at the University of Cambridge, where he was Research Director of the Illicit Antiquities Research Centre, and Stanford University’s Archaeology Center. He was co-author (with Jennifer Doole and Peter Watson) of the report Stealing History, commissioned by the Museums Association and ICOM-UK to advise upon the illicit trade in cultural material.

He also co-edited Archaeology, Cultural Heritage, and the Antiquities Trade (with Morag M. Kersel, Christina Luke and Kathryn Walker Tubb, 2006) Illicit Antiquities: The Theft of Culture and the Extinction of Archaeology (with Kathryn Walker Tubb, 2002) and Trade in Illicit Antiquities: The Destruction of the World’s Archaeological Heritage (with Jennifer Doole and Colin Renfrew, 2001). He has worked on archaeological projects in the United Kingdom, Greece and Jordan, and continues to work in Greece.

Brodie, N. and Kersel, M.M. (2012) 'The Social and Political Consequences of Devotion to Biblical Artifacts'. In P.K. Lazrus and A.W. Barker (eds) All The Kings Horses: Looting, Antiquities Trafficking and the Integrity of the Archaeological Record. Washington DC: Society for American Archaeology; 109 - 125.

Brodie, N. and Contreras, D. (2012) 'The Economics of the Looted Archaeological Site of Bâb edh-Dhrâ’: a View from Google Earth’. In: P.K. Lazrus and A.W. Barker (eds) All The Kings Horses: Looting, Antiquities Trafficking and the Integrity of the Archaeological Record. Washington DC: Society for American Archaeology; 9 - 25.

Brodie, N. (2011) ‘The Market in Iraqi Antiquities 1980–2009 and Academic Involvement in the Marketing Process’. In S. Manacorda and D. Chappell (eds) Crime in the Art and Antiquities World: Illegal Trafficking in Cultural Property. New York: Springer; 117 - 133.

Congenial Bedfellows? The academy and the antiquities trade

Researchers from the SCCJR’s Trafficking Culture team have contributed three chapters to a new book about antiquities trafficking published by the International Council of Museums. Countering Illicit Traffic in Cultural Goods: The Global Challenge of Protecting the World’s Heritage comprises 16 chapters and is available free online. SCCJR research Associate Donna Yates has contributed a...

The European Association of Archaeologists comes to Glasgow this week for its annual meeting, and our Trafficking Culture academics will be delivering an afternoon of papers. Trafficking Culture: Research into the Global Traffic in Cultural Objects at the University of Glasgow is being held at the university’s Mathematics Building, Room 325, on Thursday September 3 from 1.30pm to...