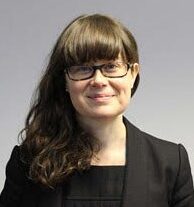 University of the West Coast of Scotland

Kirstin Anderson is a Lecturer in Criminal Justice at the University of the West of Scotland. She completed her PhD at the University of Edinburgh, her thesis Music Education and Experience in Scottish Prisons contributes to the developing research on the benefits of arts provision for people in custody and provides a baseline for further work on music education in Scottish prisons. Kirstin taught music at Polmont Young Offenders Institution in Scotland, designed a workbook on teaching music in prisons as part of a Knowledge Transfer grant from the University of Edinburgh and was the lead researcher on the national project Inspiring Change in 2010. In addition to her research on arts in prisons, Kirstin is interested in prison officer education especially for officers who work with women in custody. She has worked as a researcher with the Scottish Prison Service, the Scottish Centre for Crime and Justice Research, the Institute for Music in Human and Social Development and the Scottish Human Rights Commission.

Anderson, K. (2016) Ex Nemo ad Aliquis: “From Nobody to Somebody” Theatre Nemo’s role in Scottish Prisons. [online]. Available at: http://theatrenemo.org/wp-content/uploads/2015/07/Ex-Nemo-ad-Aliquis_online-version.pdf

Anderson, K. (2015) Ex Nemo ad Aliquis: “From Nobody to Somebody” – Theatre Nemo’s Role in Scottish Prisons. [Online] Available at: http://theatrenemo.org/wp-content/uploads/2015/07/Ex-Nemo-ad-Aliquis_online-version.pdf

Anderson, K. (2009) Teaching Music in Prisons: Introductory information and ideas for musicians and teachers working in prisons, University of Edinburgh


Institution:
University of the West Coast of Scotland


Address:
University of the West of Scotland
School of Media, Culture and Society
Paisley Campus
Paisley
PA1 2BE