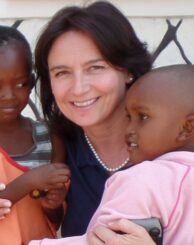 Hazel has written a monograph of her doctoral research titled Britain’s Hidden Role in the Rwandan Genocide, which is a systematic and detailed socio-legal analysis of the policies of the British Government towards civil unrest in Rwanda throughout the 1990s, culminating in genocide in 1994. It was shortlisted for the Socio-Legal Studies Association (SLSA) Hart Book Prize 2014.