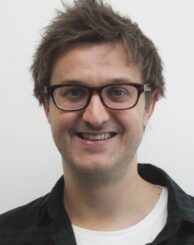 Senior Lecturer in Criminology and Sociology

Alistair Fraser is the Director of SCCJR and Senior Lecturer in Criminology based at the University of Glasgow. His work focuses on three main areas: youth, gangs and street culture; urban ethnography and qualitative methods; and global and comparative criminology.

His first book, ‘Urban Legends: Gang Identity in the Post-Industrial City’ (2015, Oxford University Press) was co-awarded the British Society of Criminology Book Prize and shortlisted for the BBC/BSA ‘Thinking Allowed’ Award for Ethnography. His second book, ‘Gangs & Crime: Critical Alternatives’, was published in 2017 by Sage.

He has received funding from the ESRC, RGC (Hong Kong), British Academy and Scottish Government. From 2017-2018, Alistair was one of the BBC’s ‘New Generation Thinkers’ and collaborated with BBC producers to create a series of broadcasts on themes of youth and gangs. Most recently, Alistair was lead author on a major new report with SCCJR colleagues on the ‘Community Experiences of Serious Organised Crime in Scotland’.

Alistair is also host of SCCJR’s podcast Just Humans which you can listen to here.

City as lens: (Re)imaging youth in Glasgow and Hong Kong

Review of ‘Global Gangs: Street Violence Across the World’

Deviation from the Mean? Cultural Representations of Glasgow Since No Mean City

The Scottish Centre for Crime and Justice Research’s podcast Just Humans is back! We have four episodes this season which kicks off today with a conversation all about family with Dr Cara Jardine, University of Strathclyde, and our Director Dr Ali Fraser. Cara and Ali talk about family as a verb, what prisons can do to help families connect...

Scotland once had the unenviable position of being the most violent country in the developed world until an innovative public health approach brought radical reductions in violent crimes in the last decade. Though territorial gangs once dominated headlines about Glasgow, today youth violence has reduced significantly. While the Violence Reduction...

The Scottish Centre for Crime and Justice Research has today launched a new podcast called ‘Just Humans’. The series will introduce listeners to the criminologists who make the Centre, their lives and work and what inspires them. Hosted by Dr Alistair Fraser, Director of SCCJR, it will explore a number of themes with guests on episodes...

Statement from SCCJR on our work and COVID 19

Dear friends and colleagues, This is a challenging time for all of us. All of our staff are now working remotely and adjusting to new workloads alongside caring responsibilities. Much of our day-to-day research has been temporarily suspended as we adapt to life under lockdown. Yet issues of crime, justice and harm have not disappeared. Though there are early reports of reductions in crime, and a...

We are delighted to announce that Dr Alistair Fraser has taken over as the new Director of the Scottish Centre for Crime and Justice Research. He has replaced Professor Sarah Armstrong who has led the Centre for the last three years. Dr Fraser, who is a senior lecturer in criminology based at the University of Glasgow, said he was looking forward...

SCCJR’s  Alistair Fraser will feature on BBC Radio 3’s The Essay programme on Friday evening (21 June). Recorded with an audience at the York Festival of Ideas his essay, Hard Man in the Call Centre’ traces the story of Glasgow’s unpredictable tough guy, schooled in both fist and knife, a symbol of the city’s...

A paper co-authored by Dr Alistair Fraser, Senior Lecturer in Criminology and Sociology, University of Glasgow has won an ‘outstanding paper’ award from the Hong Kong Studies Association. The paper is called ‘The Second Life of Kowloon Walled City: Crime, Media and Cultural Memory’ and was presented by Alistair at the Association’s...

The changing face of serious organised crime, its impact in communities and the potential for local services to prevent exploitation, have been highlighted in new research. The 18-month study, which looked at serious organised crime (SOC) with deep roots in specific areas, as well as more ‘mobile’ forms of SOC, was published today (Mon 4 June)

From left, Beth Weaver, BSC Prize Convenor James Treadwell, and Alistair Fraser Two Scottish researchers have won the British Society of Criminology’s Criminology Book Prize. The SCCJR’s Dr Alistair Fraser, of the University of Glasgow, and SCCJR associate Dr Beth Weaver, of the University of Strathclyde, were recognised for their titles on two wide-ranging topics: youth gangs and...

Dr Alistair Fraser‘s book Urban Legends: Gang Identity in the Post-Industrial City was among six shortlisted for a major award this spring. BBC Radio 4’s Thinking Allowed, in association with the British Sociological Association, presents The Ethnography Award annually to a study that has made a significant contribution to ethnography: the in-depth analysis of the everyday life...

Seminar by Alistair Fraser on Urban Legends: Gang Identity in the Post-Industrial City

Dr Alistair Fraser will discuss his new book on young people and gang identity in Glasgow on Wednesday, February 10 as part of this semester’s University of Glasgow Sociology Seminar Series. Urban Legends: Gang Identity in the Post-Industrial City (Oxford University Press) tells a story of young people, gang identity, and social change in Glasgow, challenging the perceptions of gangs as a...

Youth, Politics and the Art of Resistance

Dr Alistair Fraser from the (Re)Imagining Youth team is to present a one-off evening event in Glasgow focusing on the role of young people in the recent political movements in Scotland and Hong Kong. From Umbrella Movement to Indyref: Youth, Politics and the Art of Resistance will take place on October 13 at the city’s CCA, and will include a screening of the documentary film Lessons in...

(Re)Imagining Youth exhibition to be held in Glasgow

The (Re)Imagining Youth team are set to share their work with the public in an exhibition in Glasgow. The Glasgow exhibition runs from November 7 to November 14 at The Bridge, Easterhouse, and forms part of the Economic and Social Research Council’s Festival of Social Science. It will focus on changing representations and realities of youth leisure in Glasgow and Hong Kong, and will bring...